Our Lady of Tickfaw

Posted on November 9, 2014 by danardoyle

I awakened yesterday morning with a question on my heart, “Where is that place in Tangipahoa ( a parish in Southeast Louisiana) where the Blessed Virgin Mary was said to have appeared?” I’m not sure why that came to my mind.

Perhaps it is because this has been such a difficult week for me physically, mentally, and even spiritually.  I needed something to give me hope – perhaps some added grace – to keep putting one foot in front of the other.  I did an internet search for the answer to my question and found that the information was scant.  I was lucky enough, however, to find an approximate location – at least a street name and a zip code for the site.  We gassed up the car, picked up a picnic lunch and were off on a mini pilgrimage in no time.

What we found when we arrived, was an opened gate and an overgrown lot filled with statues, stations of the cross, a fountain and a little chapel.   Sadly, it appeared that part of the property still holding a small chapel and some pretty statuary may have been sold off, because it was fenced off and posted with a warning to trespassers.

This is what I was able to find out about the alleged apparitions:

“Alfredo Raimondo founded Our Lady of Tickfaw on a former landfill site he bought in 1987 after returning from Medjugorje, a shrine site in Yugoslavia. Considered a visionary and messenger, he began preparing for a gathering to pray and honor Saint Joseph two years later.
The message was, “Pray for peace, pray from the heart.”
Word went out and on March 12, 1989, an estimated 20,000 people showed up. A Mass, prayers, confessions and a candlelight vigil took place. There were reports of healings and visions.”  Taken from “The Daily Star,”  Sylvia Schon.  Monday, May 15, 2000 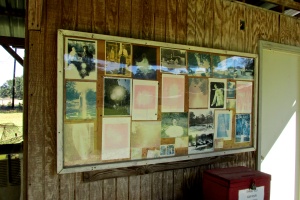 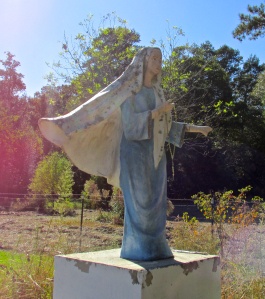 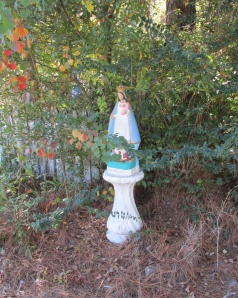 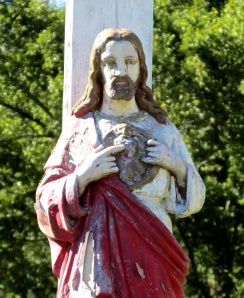 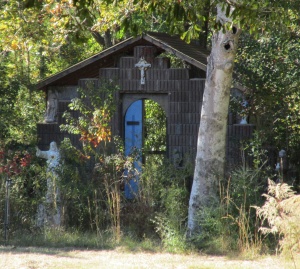 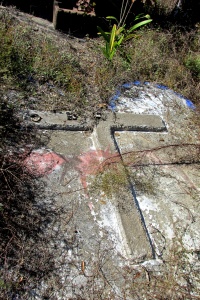 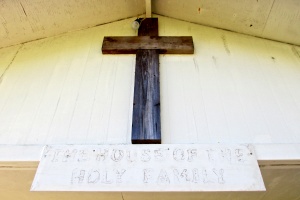 Despite its state of overgrowth, I found the grounds to be a peaceful place.  No one bothered us as we visited each area at a leisurely pace.  I was able to spend a while in prayer before Our Lady of Tickfaw, the afternoon sun forming a halo around her head.

I would love to talk to Alfredo’s widow and hear the story of her husband’s mystical experiences firsthand. I would like to learn more about the great gathering that took place there in the Tickfaw field in 1989.  If Mary did in fact appear there, it would make me very sad to see the sacred place so abandoned.  Someone still cuts the grass on the property, but some love and elbow grease could easily restore it to its original splendor.  Wouldn’t it be wonderful to have a place nearby where people could make a little pilgrimage?  I am so glad that we went.  I know that I walked away feeling a renewed sense of peace.

I am a Catholic, working wife and mother. I have three children ages 14, 20 and 27. I am extremely busy, as you can imagine. I aim each and every day to put God first in my life, to teach my children the Faith, to be a supportive spouse, keep the house in order, and do my job outside of the home well, too. That's an impossible task - without Divine intervention! Here, I hope to share my triumphs and struggles with other working moms in the same boat. I will share the tools I have discovered to making it all work - most days!
View all posts by danardoyle →
This entry was posted in Catholic, Catholicism, photo entry, Prayer, Uniquely Catholic and tagged Blessed Virgin Mary, catholic, Marian apparition in Louisiana, Our Lady of Tickfaw, religious statues. Bookmark the permalink.

1 Response to Our Lady of Tickfaw