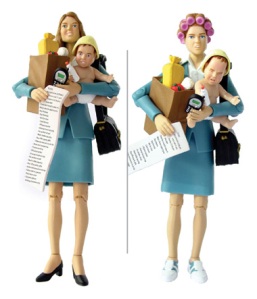 One of my personal struggles with being such a busy working mom is not having a perfectly ordered house at all times.  It is something I desire, but have had to relinquish due to the demands of life.  I say I have relinquished it, but not 100%, because it still frustrates me from time to time.  My wise mother in law once told me, “One day your house will be beautiful – perfect – and empty.”  That’s a sobering thought!  We all know how fast our kids grow up, and how time seems to go faster the older we, as parents, get.

Another struggle I have as a tired momma is the guilt I sometimes feel for not allowing my kids to do lots of extracurricular activities like many of their friends.   I worry that they are missing out on an opportunity to develop an undiscovered gift or talent.  The other part says that I don’t want to spend what little free time I have with my family in a minivan going from practice, to class, to an event, to game, etc.  I have a rule that each child may only do one extra activity at a time – and sometime we completely take a rest from the extracurricular “circuit.”  I would rather spend our weekend pitching in to finish chores together so that we can play ball in the yard, go on a family outing, or visit extended family.  I don’t know if this is the best approach, but it’s mine.  Only time will tell if it was a smart decision or not.

There are many other concerns for which I wrestle mentally.  Having a three-day weekend every week would certainly solve some of our difficulties and relieve stress!

What are your greatest concerns or struggles as a working mom? (“Working mom” is a redundant title by the way – if you are a mom, you definitely work a lot- be it inside or outside of the home!)

I am a Catholic, working wife and mother. I have three children ages 14, 20 and 27. I am extremely busy, as you can imagine. I aim each and every day to put God first in my life, to teach my children the Faith, to be a supportive spouse, keep the house in order, and do my job outside of the home well, too. That's an impossible task - without Divine intervention! Here, I hope to share my triumphs and struggles with other working moms in the same boat. I will share the tools I have discovered to making it all work - most days!
View all posts by danardoyle →
This entry was posted in Faith & Children, miscellaneous and tagged frustrations, messy house, struggles, too many extra curricular activities, working mom. Bookmark the permalink.